Here is a summary of all the updates and changes that we have made to the game in the Maintenance activity on 2nd December 2015.

We have implemented Server Economy Cycle v2 which is a drop system based on statistical calculation of the total number of items of a particular kind in the server and dynamically adapting drop rate inorder to compensate for the item demand and supply.

The following maps are affected as a result of the update.

The following maps have been excluded from being considered for Server Economy.
1. Nevia Canyon

The drop rates in Nevia Canyon have been drastically increased and will be accessible only during the events and to the winners of the Nevia War. There will be separate Nevia Events for Auras and Non-Auras.
Regards,
[GM]Scar
A3 Mania Server Dev.
Top

We have launched a Player ranking system which will help showcase a player's skill and talent. Each player will have a Solo Points and 1vs1 Points. The combination of Solo and 1vs1 points will be used to decide the players ranking in the server globally.

Solo Points
* RB 12 Players will gain 100 points initially.
* Each time you kill a player from a different town, you will gain points from the player (If the player has any points left)
* The number of points that you gain depends on the Map where the player kill has taken place.
* If you change towns during the course of the game, all of the points that you have gained will be reset to 0.

Points will be reset on 4th December 2015 12:00 AM and all the points gathered after that would be considered final.

1vs1 Points
1vs1 Ranking will be based on class based wars between 2 players both in Proxima and normal world. 1vs1 Points will constitute to the majority of the total ranking of the player.

More details about 1vs1 Points and match fixtures will be announced soon.

You can view the Player Leaderboards here: http://www.a3mania.com/player-ranking

Please note that a character will be listed on the Leaderboard only if the character has atleast one player killing / 1vs1 pvp activity in the last 1 month. If 2 characters share the same ranking score, priority would be given to the character who gained points most recently.
Regards,
[GM]Scar
A3 Mania Server Dev.
Top

Knighthood ranking is a combination of the points of all the players contained in a knighthood. These points are updated and calculated in real-time.

Characters having Negative Percentage Experience will be facing penalties which would affect Player Killing to a great extent. If your character is in negative experience, you will deal less damage to other players but inturn take more damage from other players. The damage taken and dealt on Monsters and Bosses will remain unaffected. These penalties don't apply in the Arena.

We have added a new NPC to help recover negative experience in a speedy way. 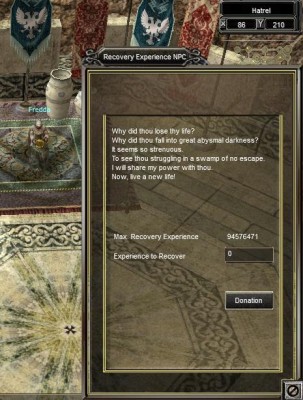 You can find the NPC "Fredda" in Hatrel. Be sure to offer her a donation in return for your negative exp. ;)
Regards,
[GM]Scar
A3 Mania Server Dev.
Top

There was an issue bought to our notice which involved a bug in the implementation of Reverse Cure and Wide Darts skill which would cause insane damage to anyone in the vicinity. This issue has been fixed in Proxima and can no longer affect player killing or monster hunting in any way.

Since this is clearly a bug that gave players using it an unfair advantage, players who have exploited this bug and haven't reported it would be facing penalties as decided by the Gamemasters.
Regards,
[GM]Scar
A3 Mania Server Dev.
Top

The NPC Sell rate of the following items have been reduced.

The timings of the Hamutz bossing is changed as follows.

* Snowman have been removed from all maps and will be reintroduced during Christmas.
* Bonus Maps Duration has been increased to 20 Minutes.
* Surrovn item name has been fixed.
* Using Freewill or Freedom on yourself will always succeed and will not fail due to Grade 10 options.
* Fixed an issue wherein Freewill and Freedom failed to work in Knighthood Battleground.
Regards,
[GM]Scar
A3 Mania Server Dev.
Top
Post Reply
10 posts • Page 1 of 1